Property : You must be a mage to become attuned to this item. The staff has 10 charges. As an action, you can expend 1 charge and cast one of the spells contained within the staff: charm person, command, or comprehend languages.
If you expend the staff’s last charge, roll a d20. On a 1, the staff blackens and loses this property. The staff cannot regain charges and functions as a normal quarterstaff. The staff regains 1d6 + 4 expended charges each day at dawn.
Secret: The staff’s secret is revealed to its wielder the first time that person is the target of an enchantment spell. Once per day when you fail a saving throw against an enchantment spell, you can turn the failed saving throw into a successful one. Furthermore, you can expend 1 charge as your reaction to turn that enchantment spell against its caster, as if you had cast the spell yourself.

This length of oak has end caps of silver. Fine threads of bright light twine almost hypnotically through the grain of the wood. A person grasping this weapon feels confident in social situations and feels as if he or she can convince anyone of anything. 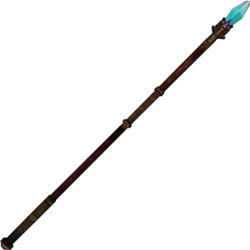