Howls From the North

The inhabitants of Icewind Dale have been caught off guard by the unusually harsh and early winter this year, and the Reghed barbarians have borne the brunt of it. Thanks to its size and strength, the Tribe of the Elk has managed to survive so far, but every day its situation worsens. On top of that, the mysterious woman the barbarians call the Ice Witch has been leading bands of wild beasts in attacks against their camps. Every time the Elk Tribe warriors strike her, the Ice Witch vanishes into the storm, only to reappear a few days later during the next attack. 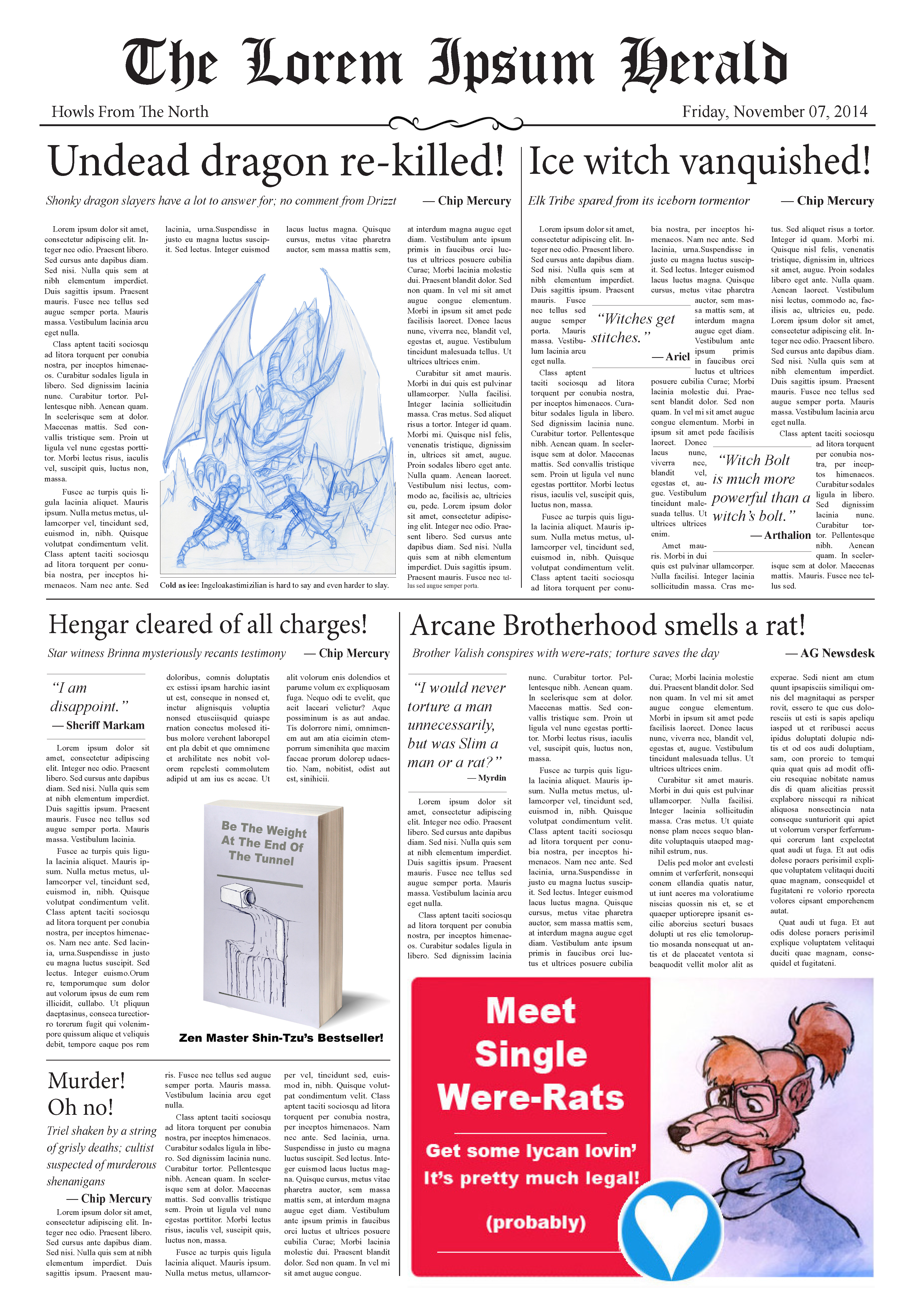 The Siege of Bordrin'­s Watch

The dwarven stronghold of Bordrin’s Watch has stood for hundreds of years between the people of the city of Overlook and the orc infested wildlands. Many orc tribes have met their end upon the keep’s ancient walls, and the orcs have been too fearful to try assaulting the keep for nearly twenty years. But now a new warlord has united the clans and marches with an enormous army of orcs, trolls and worse – shadar-kai witches with the ability to summon fiends directly from the Shadowfell. The keep is undermanned and calls for aid – the Adventurers Guild will answer.

The paladins of Elturgard are at wits’ end; bandits are looting the trade city, Scornubel. With the depletion of much-needed resources, someone needs to flush the bandits out of their nests – and perhaps become local heroes in the process. 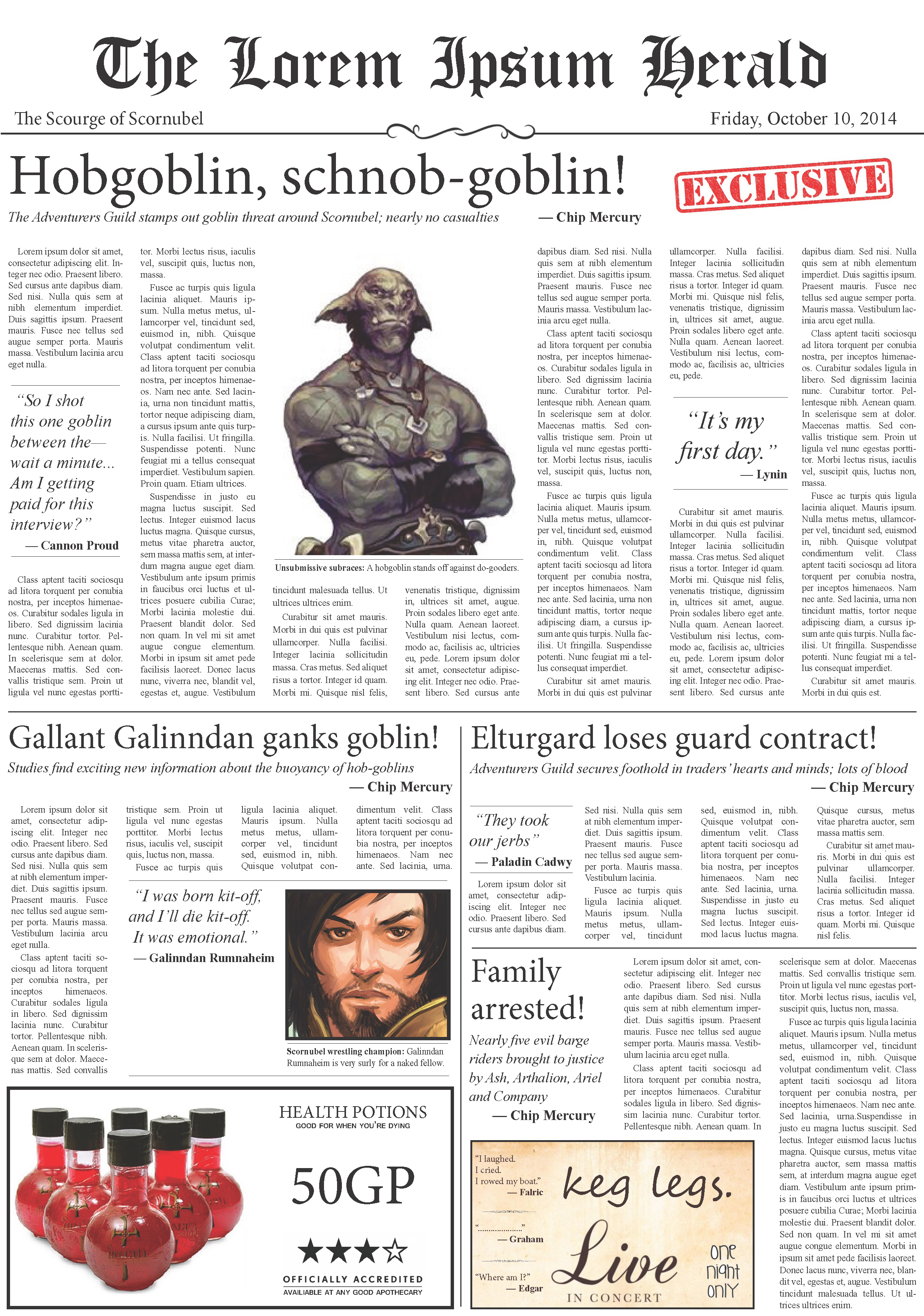 About a century ago, several thousand svirfneblin called Blingdenstone home. Their former settlement is a mere forty—‐five miles from Menzoberranzan, the drow city, but the gnomes used illusion, geomancy, and traps to avoid drow attention. This peaceful existence was shattered, however, when drow came in force to enslave the svirfneblin. Fewer than a thousand gnomes escaped to the surface, finding refuge in city of Silverymoon in the Silver Marches, where most have lived in exile ever since.

In the last four decades, svirfneblin have begun moving back into the ruins to recover their homes, with aid from the folk of the Silver Marches. But developments in the past few years have drawn the attention of surface folk away from Blingdenstone. Efforts to reclaim the ruins have stalled. The gnomes’ supplies and numbers have begun to dwindle. They need help to reclaim what is rightfully theirs.

Two years ago, the city of Myth Drannor was overrun with vermin. While adventurers were able to purge the infestation, bigger problems at the time ensured few paid attention. Now an awfully familiar fungus spreads its tendrils through the ancient woodlands of Cormanthor and this time it’s proving harder to kill…

A number of new characters were recruited by the Adventurers Guild this week and were sent off on their first mission.

After travelling through the portal, the party met Tellanor Audark at an Elven patrol camp who briefed them on the problem of the tainted forest and requested they venture within to uncover the source of the taint and hopefully put a stop to whatever power is behind it.

One month ago, scouts reported the growth of several patches of fungi throughout Cormanthor, which soon spread to claim large sections of the forest. This growth seems to defy the normal laws of nature, and over the last month these fungal growths have started to corrupt the forest plant and animal life. The last group we sent to scout the area has not returned, and Tellanor fears they have fallen.

After leaving the camp and being led to an entrance to the woods, the brave adventurers set forth to investigate. Once under the trees, they quickly noticed the stagnant waters, sickly trees, and distinct lack of animals.

After scouting a possible path the previous patrol may have taken, they came to a wide clearing, with a lone, ancient tree in the middle. After noticing a shadowy upper branches, Galinndan instinctively threw his trusty hand axe at the creature. It missed, but landed squarely into the trunk, which immediately upset the creature. Myrdin then noticed the creature to be a dryad, a nature spirit who shares her existence with her beloved tree. Both dryad and tree have been sickened by the disease though. Using amazing negotiation skills in the sylvan language, Myrdin calmed the dryad and even convinced her to come down and be healed by Ariel’s paladin skills. The dryad had originally tricked them, saying the scouting party was one way, but had a change of heart and told them the truth and that they went in a different direction. Edgar continued to pen his poetry verses.

Heart of the Corruption

The guild has received a cryptic distress call from one of its agents in the Shadow Marshes. The council has decided to put together a party to investigate…

The Adventurers Guild’s newest recruits barely had time to see the Guild’s keep before they were assigned a mission by General Crelith. He informed them that one of the guild’s agents – Doria Valedaar – had been investigating cult activities in and around the Shadow Marches for several weeks, but that her communiques had cut off abruptly several days ago. Their mission was simple, find Doria and help her finish the investigation.

Kiros’ portal sent the party into the swamps near the village of Blackroot, the centre of Doria’s investigations; and with some help from local merchants, they reached the town in the early afternoon. When they arrived in the village, they were immediately confronted by the village reeve, a half-orc named Toraash – who informed them that the town had no taverns or inns, so they’d best be on their way. Falric managed to calm the conversation down somewhat, and upon inquiring about Doria, they were told that she had left town several days ago.

With no other way to pick up the trail, the party made their way to the house that Doria had been staying in, only to discover that the house was a mess. Several people had obviously been taken in a struggle. Grim Tim managed to find cult paraphernalia including shards of volcanic glass daggers and a necklace made of a mummified eyeball. Clearly the cultists had learnt of Doria’s investigation, and taken steps to remove her.

The party split up to search the town, and eventually found a small path leading out of the north of town. Diokana got lucky and spotted some suspicious figures heading that way. She quickly rallied the party and they set off in pursuit. The party discovered the entrance to a cave, guarded by some burly looking orcs. They tried to talk their way in, but things soon deteriorated into combat, leading the party to quickly learn that the cultists were no longer wholly human or orc – limbs had been replaced with tentacles, and they appeared to have extra eyes.

After solving the puzzle to open the cave’s entrance, the party started heading deeper into the cultists lair in search of Doria and answers. It quickly became apparent that greater forces were involved, with demonic language flowing along the walls in an eerie red light. Unfortunately, the party’s greatest enemy seemed to be the narrow stairways leading down into the lair. Several of the party members found themselves tripping over, bouncing down into rooms full of cultists.

Several battles were fought, and the party seemed to be getting the better of the evil cult, but Grim Tim made the mistake of attacking one of the large eyeballs attached to the fortress’ walls. He was immediately absorbed by the eye, whose acidic interior quickly rendered him unconscious. Diokana was also drawn inside the eye, forcing the party to try and free the pair as quickly as possible. They managed to get Diokana free in time, but Grim Tim wasn’t so lucky, all they found was a dissolving corpse.

Shaken by the loss of their comrade, the party fought their way deeper into the base, eventually coming across a small jail containing several villagers and a wizard who called himself Graham the Magnificent. Apparently he had been working with Doria to uncover the cult, but had been kidnapped along with her. Graham informed them that Doria had just been taken to be sacrificed to Belashyrra, a demon known as the Lord of Eyes, so the party raced further into the dungeon. Unfortunately, the stairs seemed to be just as perilous in this part of the keep, and the party’s shaman tumbled down into the middle of the ceremony.

As the rest of the party hurriedly followed, they discovered that Toraash (the village reeve) was the head of the cult, and he was now clothed in a suit of armour that seemed to be made out of flesh, with multiple eyes and tentacles along its surface. An epic battle ensued, and Falric managed to free Doria and take down Toraash. Unfortunately, Toraash’s armour seemed to have a mind of its own and promptly attached itself to Falric, promising him great things in return for his help. Graham came over to help Falric, but only ended up with the armour attaching itself to him. As a much more pragmatic person, Graham magically determined that the armour held no ill will against him, and thus decided to keep it.

After taking down the remaning cultists, the party went into the room behind the sacrifice chamber and discovered that the cultists had been transforming innocent villagers into the creatures that they had been fighting. Though they couldn’t save those that had already fallen, the party nonetheless managed to save the majority of the villagers, who promptly held a celebration in their honour. Their duty complete, the party decided to enjoy the festivities before using the hearthstones to return to the guild keep.